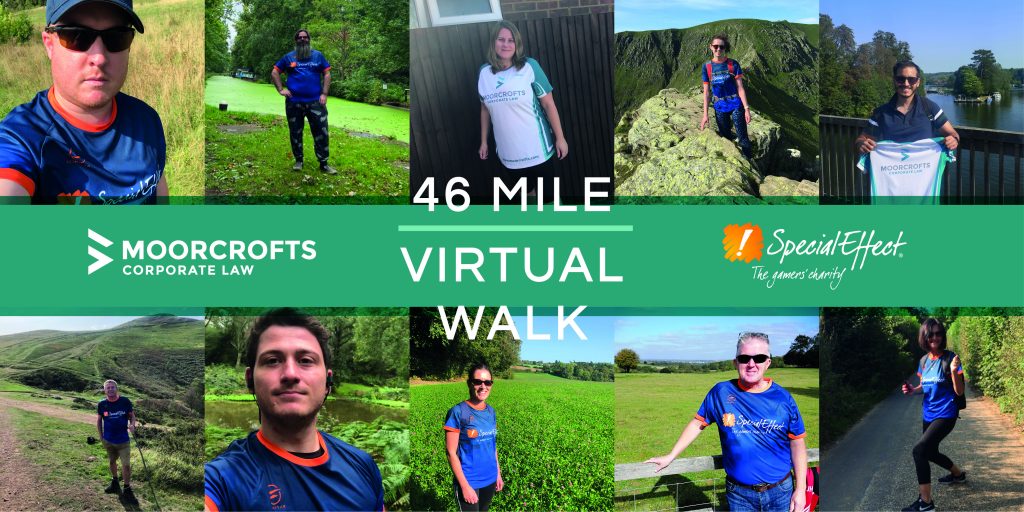 A team of budding walkers from Moorcrofts, have worked together to complete a virtual walk from its office in Marlow to its charity partner, SpecialEffect’s office in Charlbury.

The 46-mile route was divided into ten sections with each member of the Moorcrofts team walking approximately 5 miles. The team has undertaken the challenge over recent weeks completing it to coincide with and support SpecialEffect’s ‘One Special Day’ campaign.

Every year on ‘One Special Day’, this year on 2nd October, SpecialEffect invite partners to donate sales revenue and host virtual events, promotions and livestreams – with the aim of raising £250,000 to support the charity. In 2019, over 50 games industry companies worldwide took part and since its inception in 2016, the ‘One Special Day’ campaign has raised over one million pounds. Campaigns like this one, contribute to its much-needed income as the UK-based charity doesn’t charge for any of its services and relies entirely on voluntary income.

“The virtual walk forms part of our wider campaign and fundraising initiatives to support SpecialEffect and hopefully reach our £4000 target in the coming months. Our team has had great fun completing this challenge and we wish SpecialEffect every success with its ‘One Special Day’ campaign.”

To support Moorcrofts’ virtual walk, donations to SpecialEffect can be made via the Just Giving page.

SpecialEffect is a charity that puts fun and inclusion back into the lives of people with physical disabilities by offering bespoke technology to enable them to play video games. By levelling the playing field, they bring families and friends together, having a profoundly positive impact on therapy, confidence and rehabilitation.