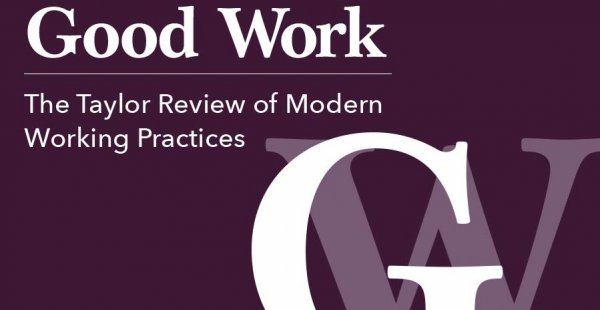 The Taylor Review: Is the “Gig” Up for Employers?

Earlier this week the long awaited ‘Taylor Review’ of modern working practices was published.  The report, now badged as the “Good Work Review”,  received a great deal of media coverage, with different broadcasters and commentators choosing to focus on different aspects of the wide ranging set of recommendations in the report.  In this article, we’ll summarise the key elements of the report and consider what will happen now that the report has been published.

Employment status and the gig-economy

The principal focus of the Taylor Review was that of employment status.  The question of whether the categories of ‘employee’, ‘worker’ and ‘self-employed’ remain relevant to today’s working practices arose from the recent growth of the gig-economy, in which many individuals have been, so far as the Employment Tribunals are concerned, wrongly classified as self-employed when they should in fact have been treated as ‘workers’ and benefitted from associated rights such as paid holiday and entitlement to rest breaks.

The report recommended that we keep the three categories of employment status but went on to suggest that legislation should be updated to provided clearer, statutory definitions of each category and a possible relabelling of workers to ‘dependent contractors’ to emphasise that such people do not have full employment rights.

To date, the requirement for an individual to be obliged to perform work personally has been a key factor in determining whether someone was an employee or a worker as opposed to being self-employed.  The report recommends that we move away from this requirement and focus instead on the issue of control.  If a business exercises a high degree of control over the services which an individual provides, then that should be more important to determining their employment status than the issue of whether they could ask a substitute person to perform those services on their behalf.

The report also includes a number of specific recommendations to support the newly emerged gig-economy, including how our national minimum wage legislation and working time regulations could be adapted so as to offer greater protection to gig-economy workers whilst at the same time protecting businesses who choose to operate using a gig-type structure.

Contrary to the hope and expectation of some commentators and the Trade Unions, the report was reasonably lenient on the topic of zero-hours contract.  There was no suggestion that they be abolished, just a recommendation that those who work under such contracts should possibly benefit from a higher rate of national minimum wage and a suggestion that someone who has worked on a zero hours contract for 12 months or more should be given the right to request a contract with guaranteed hours.  A ‘right to request’ will not be of very much use though if an employer can turn down such a request too easily.

It is a long standing anomaly that being an ‘employee’ or a ‘worker’ for the purposes of employment legislation does not automatically mean that you are considered as ‘employed’ for tax purposes.  The report recommends that the distinction between employed and self-employed status should be aligned for both employment law and taxation purposes, so that we no longer have the potential for a person to ‘self-employed’ for tax purposes but be considered to be a ‘worker’ for the purposes of determining their employment rights.

Just over 10 years ago the European Court of Justice held that paying ‘rolled up’ holiday pay to employees should be prohibited.  This decision has always caused practical difficulties for those employers who employ a casual workforce and for whom the idea of paying an enhanced hourly rate to compensate for holiday pay was far easier than having to calculate holiday accrual for individuals and make sure they had the opportunity to take such holiday.  The report recognises that many employees choose to work on a casual basis, benefitting from the flexibility it offers to them, and that perhaps paying those employees ‘rolled-up’ holiday pay is not such a bad thing after all.  The report suggests that employees should be given a choice between receiving an enhanced hourly rate of pay or ‘holiday pay’ in the traditional sense.

There were no radical recommendations on this topic, despite the hope of many that the abolition of fees may be on the cards.  The report notes that it is “unlikely” that the government will move to abolish the fees and the report stops short of recommending that as a course of action.  It does, however, recommend that claimants should be able to have a tribunal determine their employment status free of any charge.  In cases where there is a question over an individual’s employment status, this would allow the employee to make a better informed decision about whether or not to make the financial commitment of pursuing their tribunal claim.

The Taylor Review has covered a lot of ground and, at 115 pages long, it’s not surprising that there are a lot of different aspects to the report for everyone to consider.  We probably shouldn’t get too excited though.  The recommendations in the report are just that, recommendations, and there is no obligation on the government to actually implement any of them. With Brexit on the horizon the government already has a lot on its legislative plate and there simply isn’t a great deal of time in the government’s schedule for many of the recommendations to be properly debated, consulted upon  and written into our statute books.

We’ll no doubt see some changes to our employment laws as a result of this review but, much like the impact of Brexit on employment rights, I expect any changes will be gradual and possibly not as radical as Matthew Taylor’s report may have hoped.

If you would like any further information on how the Taylor Review will impact on your business please contact Matt Jenkin on 01628 470011 or matt.jenkin@moorcrofts .com

Matt Jenkin to speak at the Howden Employment Webinar