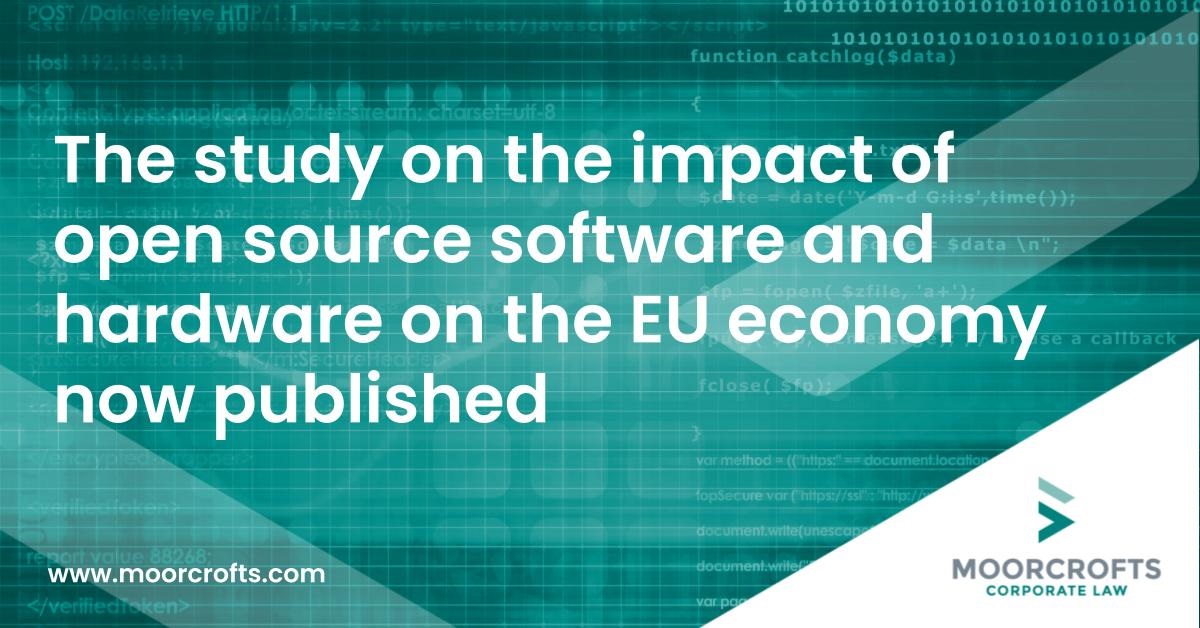 On Monday 6 September, the European Commission published the results of the study analysing the economic impact of Open Source Software (OSS) and Hardware (OSH) on the European economy.

Moorcrofts Joint Managing Partner and Head of Tech and IP, Andrew Katz led the Open Hardware section of the study and is co-author, following the contract being awarded to OpenForum Europe and Fraunhofer ISI in January 2020.

Open Source Software (OSS) has become mainstream across all sectors of the software industry over the past decade. Conversely, the level of maturity of Open Source Hardware (OSH) appears currently far lower. However, the business ecosystem for OSH is developing fast. If OSH is to follow the same development as OSS, it could constitute a cornerstone of the future Internet of Things (IoT), the future of computing and the digital transformation of the European industry at the end of the next decade.

The objective of the study has been to investigate and quantify the economic impact of Open Source Software and Hardware on the European economy. The study has also identified strengths, weaknesses, opportunities and challenges of open source in relevant ICT policies (e.g. cybersecurity, Artificial Intelligence (AI), Digitising the European industry, the connected car, HPC, Big Data, Distributed ledger technologies, etc.). Economic evidence of the footprint of open source in the EU has been collected. A list of policy options to maximize the benefit of open source supporting a competitive EU software and hardware industry supporting the twin environmental and digital transformation of the EU economy is also proposed.

There are clear signals from investors on the huge value and potential of Open Source. Policy to maximize the return in Europe of this value may be required. In the short-term, the findings of the study will be used as a basis for policy options in many digital areas. In the long-term, it can be used for a new open source policy focussed in the EU economy as a whole.

The main break-through of the study is the identification of open source as a public good. This shows a change of paradigm from the previous irreconcilable difference between closed and open source, and points to a new era in which digital businesses are built using open source assets. This information is essential to develop policy actions in the field. The study also values the economic impact of open source commitments on the EU economy.

“The study has been welcomed as the first major analysis of the economic and societal impact not only of open source software, but also of the emerging and increasingly important domain of open hardware. It was an honour to lead the open hardware aspects of the study, which will be used by the European Commission to set the agenda for EU policymaking in this field for the next 10 years.”

It is estimated that companies located in the EU invested around €1 billion in OSS in 2018, which resulted in an impact on the European economy of between €65 and €95 billion. The study predicts that an increase of 10% of OSS contributions would annually generate an additional 0.4% to 0.6% GDP, as well as more than 600 additional ICT start-ups in the EU. Case studies reveal that by procuring OSS instead of proprietary software, the public sector could reduce the total cost of ownership, avoid vendor lock-in and thus increase its digital autonomy.

Since October 2020 the Commission has its own new Open Source Software Strategy 2020-2023, which further encourages and leverages the transformative, innovative and collaborative potential of open source, in view of achieving the goals of the overarching Digital Strategy of the Commission and contributing to the Digital Europe programme. The Commission’s Strategy puts a special emphasis on the sharing and reuse of software solutions, knowledge and expertise as well as on increasing the use of open source in information technologies and other strategic areas.

Leading Corporate and Technology Law firm, Moorcrofts LLP is delighted to announce that it has been named a finalist in The Lawyer Awards 2021, in the Boutique Firm of the Year category. The Lawyer Awards is the leading awards

With many employers adjusting to return to work as lockdown measures are eased and with employment tribunal decisions on various aspects of COVID now coming through on a regular basis, the Employment Team at Moorcrofts are hosting a free...