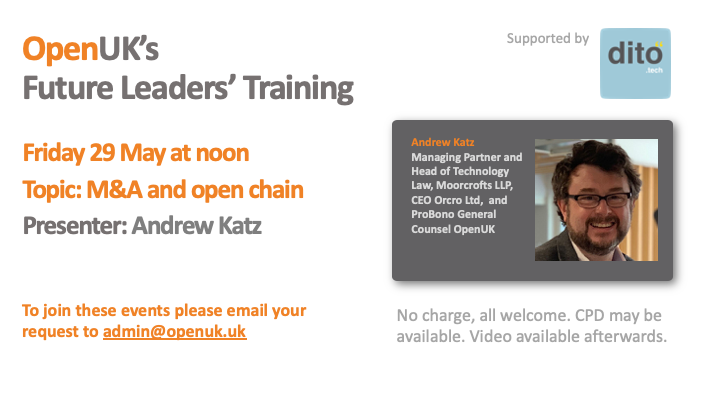 Andrew Katz, Moorcrofts Joint Managing Partner and Head of Technology will deliver a presentation proposing the OpenChain compliance standard as a framework for open source compliance in M&A as part of OpenUK’s series of Future Leaders training sessions on Friday 29 May 2020 at noon.

During the OpenUK’s Future Leaders training session, Andrew will explain how adoption of the OpenChain specification provides a great framework for due diligence in the process of M&A, simplifying and streamlining the due diligence process, and reducing friction. Startups can adopt OpenChain at an early stage, to embed open source best practice, simplify relationships with their customers, as well as providing a smoother route to fundraising or exit. Moorcrofts has developed a suite of precedent documents which it intends to release under a liberal open licence.

Andrew Katz has over 25 years’ experience as a technology lawyer. He joined Moorcrofts in March 2000, shortly after the firm was founded. He is now CEO and Head of Tech and IP. Formerly a software developer who has released software under the GPL, he now advises on all aspects of free and open source software, and has been involved for over 10 years in the rapidly expanding fields of open data and open hardware. He has lectured on open issues globally and has co-authored papers whose findings have been adopted into Swedish government policy. He has recently been appointed as General Counsel to OpenUK and is currently working with the European Commission alongside OpenForum Europe and Fraunhofer ISI to conduct a study on the impact of open source software and hardware on technological independence, competitiveness and innovation in the EU economy the findings of which will guide EU policy for the next ten years.

OpenUK’s Future Leaders group is a ground-breaking initiative from the UK, bringing the next generation of business people and developers into Open technology.

As well as curating mentored collaboration to enhance their learning process, OpenUK created a series of educational webinars covering a broad range of open source leadership topics, ranging from open source licensing and business strategies through to software development and contribution and managing a successful Open source-based business.

“Our Future Leaders webinars evolved from a couple of training sessions to support the Future Leaders’ Group’s learning process, to weekly webinars being attended by people all over the world and promoting not just UK Leadership in Open technology, but international collaboration. A positive outcome of lock down, I guess. We have built a training plan that runs through the year with sessions being led by world leaders in Open including this week’s session from Andrew Katz”

The webinars take place every Friday at 12:00pm UK time.

To book your place on the M&A and OpenChain Future Leaders training session, please contact admin@openuk.uk
All webinars are recorded and available on the OpenUK website.

OpenUK is the industry association representing Open Technology being open source software, open source hardware and open data organisations across the UK. As an industry association, OpenUK gives its participants greater influence than they could ever achieve alone. OpenUK is committed to supporting collaboration between businesses, public sector organisations, government and communities to expand the opportunities available to all around open technology. It is building a visible community, ensuring the UK’s laws and policies work for Open and promoting learning in Open Technology. OpenUK is a not-for-profit company limited by guarantee, company number 11209475.