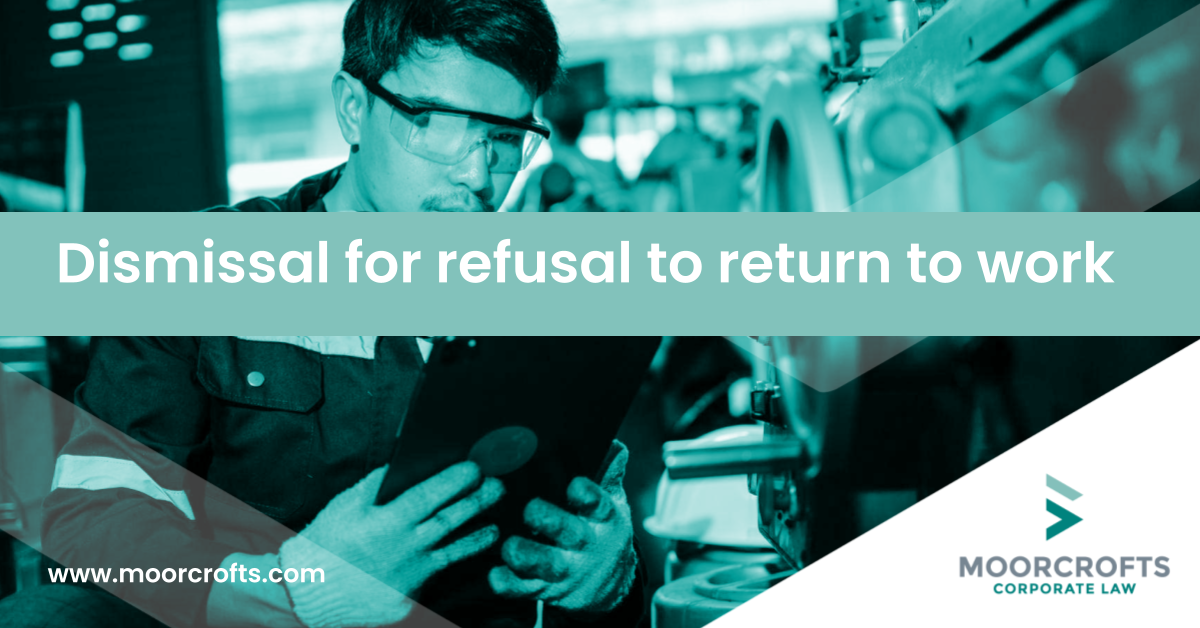 Dismissal for refusal to return to work

In the case of Rodgers v Leeds Laser Cutting Ltd, the Court of Appeal provides valuable clarification on the test for unfair dismissal, when an employee refuses to attend work, because they believe they are in serious or imminent danger.

Mr Rodgers worked for Leeds Laser Cutting as a laser operator in a large warehouse. During the first national lockdown in March 2020,  the company carried out a risk assessment to put in place several safety measures so that it could continue to operate and its employees could continue to work.  This included staggered start and finish times, facemasks for employees and social distancing.

A few days into lockdown in March 2020, Mr Rodgers sent an email to his manager to state that he would be staying away from the workplace “until the lockdown has eased” because he was worried about infecting his vulnerable children with covid,  (a baby and a young child with sickle-cell anaemia).

There was then no further communication between the company and Mr Rodgers until the company dismissed him one month later. Mr Rodgers did not have the necessary two years’ service needed to bring an ordinary unfair dismissal claim, so instead, he brought a claim of automatic unfair dismissal under Section 100(1)(d) and (e) of the Employment Rights Act 1996 (ERA).

Section 100 of the Employment Rights Act 1996 (ERA) makes the dismissal of an employee automatically unfair when:

(d)in circumstances of danger which the employee reasonably believed to be serious and imminent and which he could not reasonably have been expected to avert, he left (or proposed to leave) or (while the danger persisted) refused to return to his place of work or any dangerous part of his place of work, or

(e)in circumstances of danger which the employee reasonably believed to be serious and imminent, he took (or proposed to take) appropriate steps to protect himself or other persons from the danger.

This is a day 1 right, for all employees. The Employment Tribunal dismissed the claim. It was found that Mr Rodgers had not worn a facemask at work and had left home during the isolation period to take a friend to hospital and had also worked in a pub. The Tribunal found that these actions did not support his argument that he believed that there was a threat of serious and imminent danger from Covid-19.

In addition to this, the Tribunal found that the employer had put in place considerable steps to mitigate the risk of the spread of Covid-19 in the workplace and followed all government guidance at the time, which again, did not support Rodgers’ argument that he perceived a real, serious and imminent threat at work.

Mr Rodgers then appealed this decision to the Employment Appeal Tribunal (EAT), who dismissed his appeal.  He then appealed to the Court of Appeal, who also dismissed the appeal, on the grounds that the Tribunal’s original decision could not be faulted.  The court referred back to section 100(d) of the Employment Rights Act and stated that it needed to decide did Mr Rodgers believe that there were circumstances of serious and imminent danger and if so, was his belief reasonable and could he reasonably have averted that danger? The Court decided that the answer to this was “no” and held that Mr Rodgers did believe that Covid-19 was a threat in general, but that he did not believe that there was such a danger specific to his workplace that he could not have averted.

This decision should come as some comfort to employers who conducted risk assessments and took proper steps to mitigate the risks of the spread of Covid at the relevant time. These employers should be well prepared to defend any potential claims from employees, under section 100 of the Employment Rights Act 1996, on the grounds of the belief that there was a serious and imminent risk of Covid-19 in the workplace.

For any questions about this blog, or other employment law questions, please contact the Employment Team.