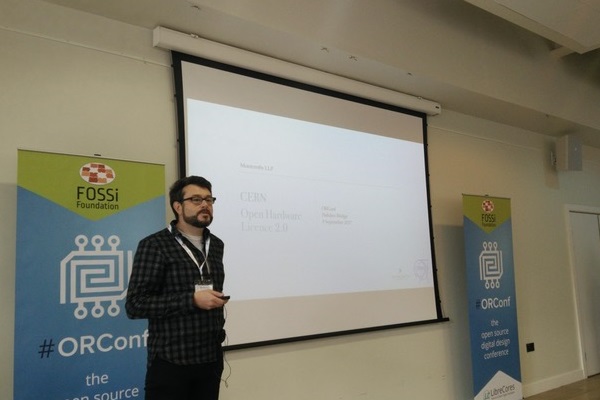 At this year’s highly successful ORConf event in September 2017, Andrew Katz presented on CERN Open Hardware Licence V2.0 and open hardware licensing. ORConf is an open source digital design and embedded systems conference, covering areas of electronics from the transistor level up to Linux user space and beyond.

As a member of the core drafting team for CERN Open Hardware Licence, Andrew’s talk included these crucial points, which helped to explain the rationale behind the need for V2.0:

1) How Open Hardware is now more mature than it once was, and there’s a broader range of use cases from mechanical hardware to nanoscale electronics. In particular, FPGAs present a particularly tricky use-case from a legal perspective, and the new version of the licence is being drafted to increase its suitability for that specific use case.

2) Electronics designers sometimes try to use other licences, such as GPL, which are not drafted with hardware in mind. Andrew also elaborated the efforts being made to make it easy for projects using GPLv3 to combine their designs with designs licensed under the CERN Open Hardware licence by increasing licence compatibility.

The event, hosted in beautiful Hebden Bridge, attracted a truly international audience with delegates coming from as far afield as Northern Ireland, Malaysia, India, the USA and Sydney.

Immediately prior to the event, Andrew attended the ChipHack challenge, sponsored by the British Computer Society (Andrew is a former committee member of their Open Source Group), and learned how to program an FPGA in the Verilog hardware description language. An FPGA (field-programmable gate array) is an extremely flexible silicon chip design that can be programmed to act as any number of complex electronic circuits, which means it can be used to dramatically speed up operations such as artificial intelligence and data-mining, which were previously carried out by computer.

The CERN Open Hardware V2.0 is due to be released in the next few months.