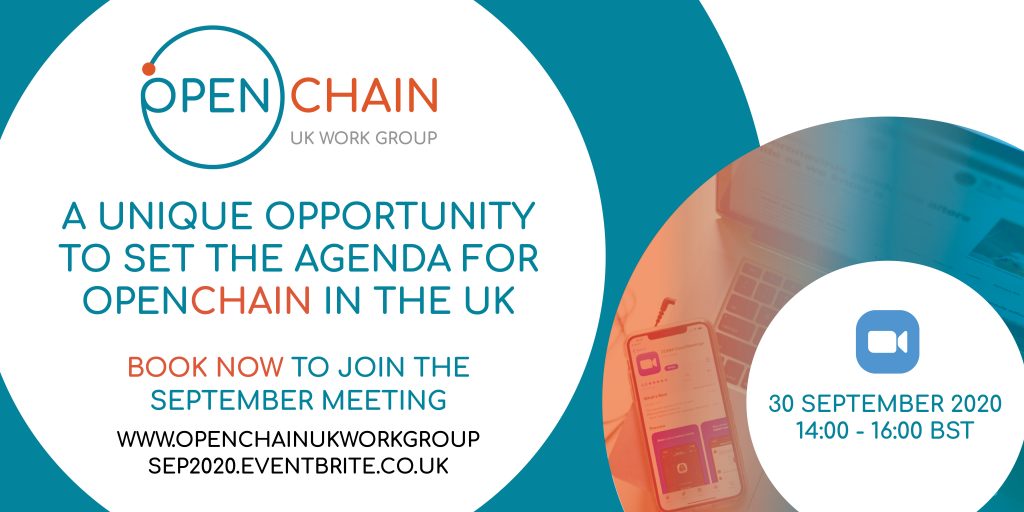 The OpenChain UK Work Group is holding its second meeting via Zoom on Wednesday 30 September from 14:00 – 16:00 BST.

This meeting will build on the success of the inaugural meeting in July which attracted a stellar roster of speakers, including: Shane Coughlan (Linux Foundation), Kate Stewart (Linux Foundation), Hiroyuki Fukuchi (Sony), Andrew Katz (Orcro), Sami Atabani (Arm),Thomas Steenbergen (HERE Technologies) and Mirko Boehm, as well as a diverse range of delegates from around the world.

There is a full agenda planned with a fantastic line-up of speakers:
14:00: Welcome and introduction by Andrew Katz (Orcro) & Sami Atabani (Arm)
14:10: News and Updates by Shane Coughlan (Linux Foundation)
14:25: OpenChain UK Workgroup: who, what, why when? Terms of reference and plans by Andrew Katz (Orcro) & Sami Atabani (Arm)
14:45: FOSSology: Opensource licence compliance system and toolkit by Oliver Fendt (Siemens)
15:20: SW360: Opensource repository and component management and compliance system by Michael Jaeger, Siemens
15:55: AOB
16:00: Thank you and goodbye!

Bookings for the September meeting are now open and can be made via the Eventbrite booking form.

The meeting is free of charge, and is open to anyone (whether in the UK or otherwise) interested in finding out more about why companies as diverse as Arm, Google, Scania, Hitachi Data Systems, Toyota, Facebook, Uber and Microsoft are embracing OpenChain, as well as smaller companies like B2M Solutions and NewRoCo.

“We’re delighted to see such a high calibre of organisations and individuals involved in the group at the early stages. As we move forward, we hope to see smaller companies join, who are looking to start their OpenChain journey, so we can continue to broaden the reach of the group and OpenChain adoption in the UK.”

To join the OpenChain UK Work Group visit: https://lists.openchainproject.org/g/uk-wg and subscribe to the list to receive future details about the bi-monthly meetings and to sync and share information across all aspects of open source compliance. More information about the group can be found on its draft terms of reference document: https://lists.openchainproject.org/g/uk-wg/files.